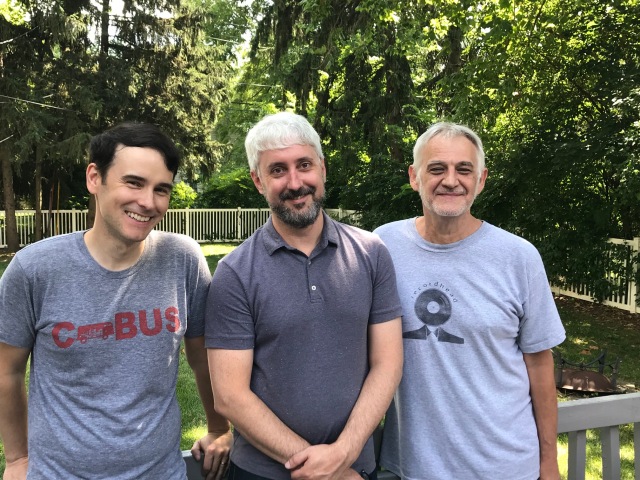 How did Dayton, OH’s sensational lo-fi pop concern Smug Brothers exist for so long without me knowing? Perhaps there is no acceptable answer, but by the time I discovered them on 2011’s terrific Treasure Virgins EP they had a handful releases to their credit and we had the Smug bug bad, so as I’m prone to do I immediately sought out those early recordings as well as their subsequent releases. It’s been an impressive run for Smug Brothers thus far and with the news of new album and a fundraising campaign to assist with getting the new set, Attic Harvest pressed on vinyl I figured it was high time we checked with with the bands co-founder and chief songwriter Kyle Melton to talk about the new album, the gofundme campaign, and the evolution of Smug Brothers.

The Ash Gray Proclamation: Can you tell me a little bit about the creative process behind the band’s new album, Attic Harvest ?

Kyle Melton: After we finished up Disco Maroon in fall of 2016, I was eager to get to work on new material, as usual. The process from writing to release of Disco Maroon had taken close to two years, which is a pretty long time for us. And as much as we enjoyed working with Micah Carli at Popside Recording for the last album, we were itching to get back to recording on the 4-track cassette machine and doing things a lot more quickly. We started tracking for what became Attic Harvest in March of 2017 and had two more sessions in July and August, although we didn’t have a clear direction of how things would be released when we started. These sessions were just Don Thrasher and I learning new songs from scratch and working up the rhythm tracks to add to later. We then invested in a computer recording interface so we could transfer from the 4-track to the computer and overdub further without having to go to another studio as we have in the past. From that point, it was myself and Scott Tribble doing guitar, bass, keyboards, percussion, and vocals to get it all done. Having never worked with Scott before, we had a lot of fun just experimenting and trying things out that really took the album to some new places for Smug Brothers. Without any agenda or timeline for the tracking of the album, we were a bit more free to see what we could and not worry about whether the clock was running or if we could pull it off live. The last overdubs were put down in early June and I mixed it all by early July. We also had a bunch of older songs from as far back as 2009 that we finally found a place for alongside all this new material. We had around 40 songs that were in consideration for the album and we cut it down to a lean 18-song/39-minute sequence.

The Ash Gray Proclamation: Can you catch us up to speed on the recent line-up changes to the band ?

Kyle Melton: By the end of last year it was clear Brian Baker and Larry Evans weren’t going to continue with the group. At the time, there wasn’t a clear timeline for a new album or any shows. It was really just me working on the album and sending rough mixes to Don. I had known Scott through my wife, Emily, and Scott and I ran into each other at the Wire show last fall in Columbus and made plans to get together. I played him some of the stuff Don and I had been tracking and he was into contributing to the songs. Once Scott and I started working together in December, the album took off pretty quickly. It’s obviously sad to see Brian and Larry go and we had a good run, for sure. Things run their course, and Don and I wanted to keep going and we’re glad Scott was able to keep rolling with us.

The Ash Gray Proclamation: Smug Brothers have recently launched a GoFundMe campaign to assist with pressing the album to vinyl. How do you feel Attic Harvest differs from the Smug Brothers past releases?Yes, we are doing a GoFundMe campaign which is going well so far. We are honored people are contributing as they have been and helping us to reach this band goal of finally putting an album on vinyl.

Kyle Melton: As far as how this album is different from past releases, well, the new album doesn’t have Brian and Larry, for starters. Brian has been with the group since 2010’s Stock Romeo, so he’s been a big part of what we do for years. I think Scott and I took things in a different direction but it’s still the Smug thing. And with Larry leaving, I covered all the bass parts and I just do different stuff than Larry so that’s going to sound different than the last few releases. Other than that, I think this sequence is a really good one: a little more acoustic stuff, some different sounds than we’ve used in the past. Since it was all recorded to 4-track cassette, it’s a bit of a throwback to what we did on On The Way To The Punchline and Fortune Rumors but we’re better at doing things this way after all these years, so it’s still moving forward. It has some good rockers, it’s pretty in places, it’s weird in places. It’s all the things we love to do with Smug Brothers.

The Ash Gray Proclamation: Other than the recent line-up changes, how has the band’s approach to writing and recording changed?

Kyle Melton: I still write all the songs and bring them to the guys to work on. I’ve gotten a bit better with demoing to the iPhone and sending demos in advance of a session, which Don seems to appreciate a lot. But once we get in a room and start hashing out the tunes, we just go with what feels right. Don and I have always enjoyed trying to capture the thrill of those first moments when a song takes shape, however that happens, and build from there. Our biggest thing is to not overthink it and capture the magic of the moment. Once you start putting a song together, you might realize a new direction with the arrangement, or Don might come up with something I never expected that makes the song work way better than I had envisioned. That’s really always been the big thing as far as how we work.

The Ash Gray Proclamation: Can we expect the band to head out on the road in support of the new album ?

Kyle Melton: Hopefully we can play a few more shows on this new album than we did for Disco Maroon, but that remains to be seen at this point. We will definitely keep everyone informed.

The Ash Gray Proclamation: What should your potential supporters know about the Smug Brothers and the forthcoming Attic Harvest LP?

Kyle Melton: We’re very proud of this new album and it was a lot of hard work learning all the new equipment and mixing an album myself for the first time since 1999. With the time it takes to press the album and everything, it likely won’t be out to everyone until the new year. We have also contracted with an Italian collage artist named Andrea Floris to do original artwork for the album. You can see the image for the front cover on the GoFundMe page and the other two pieces are equally impressive. While we’re waiting for Attic Harvest to be released, we’re planning to get to work on new recordings and keep pushing forward to the next release.

The AGP: Lastly what is on your turntable or headphones these days ?

Kyle: As far as new stuff, I’ve been digging the new Parquet Courts, Beach House, Breeders, and GBV albums that came out this year. There’s a great band called OMNI from Georgia I found out about recently. The new “lost” Coltrane album is excellent. Just got the Grateful Dead “Anthem of the Sun” remaster, which sounds incredible. Found some old albums from Heron, Please, Sparks, and Beauregard Ajax that get a lot of plays. Spent a lot of time with Joni Mitchell’s catalog this last year, which I regretfully had missed all these years. I spend lots of time listening to the electric-period Miles Davis albums, Eno, Steve Reich, and Philip Glass. And I love digging around the Dream Catalog [thanks, Derl] and Analog Africa Bandcamp pages for new stuff. There’s always so much to explore out there, you know?

If you are able to assist Smug Brothers achieve their modest goal of pressing the forthcoming, Attic Harvest on vinyl you can head over to their gofundme site to lend them a hand. In the meantime the band has shared the track, Rare & Double Clutch off the forthcoming LP.