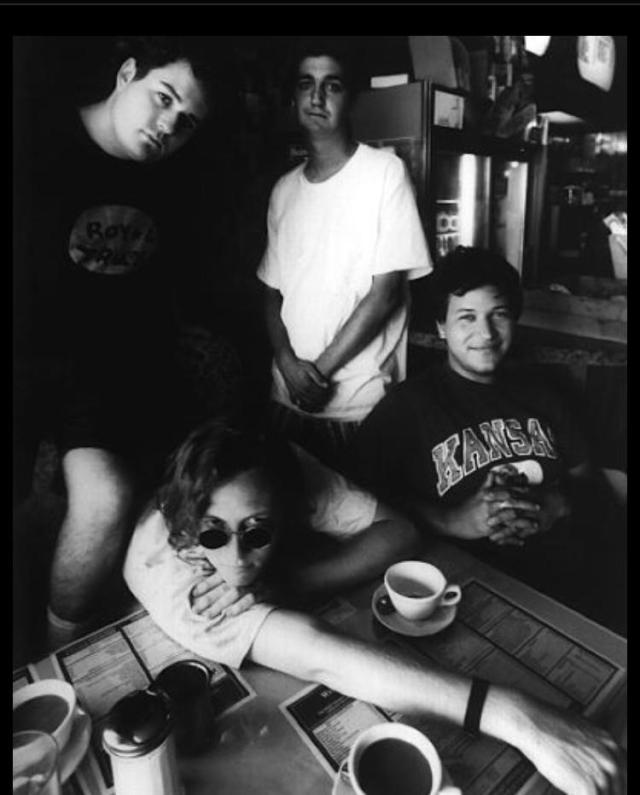 Certain recordings have the ability to stop you in your tracks and freeze time. For example I remember everything about the first time I heard Small 23‘s full length debut LP, True Zero Hook. I was sitting in the music office of my college radio station listening to that weeks new releases feeling a little underwhelmed with the task when the albums opening and title track came barreling out of the speakers. Hearing True Zero Hook was a genuine eureka moment and I was more than a little smitten. It was like I had been waiting for that moment, for that LP and for Small to arrive, but I just didn’t know it until it happened.  I managed to see the band Live in the summer of 1994 and that was all it took, I was sufficiently hooked, pun intended. After the show, along with my brother and some friends we ended up drinking cheap beer around a bonfire with the band. One of those carefree nights that could have only happened in your 20’s. Its a great memory with some lifelong friends and a band I’ve admired for 25 years now. I recently connected with former Small guitarist/singer, Mike Kenlan on social media and couldn’t resist the chance to discuss his former band, the Chapel Hill scene, and a memorable night playing rock songs in the dunes of the Cape.

The Ash Gray Proclamation: After 1995’s Silver Gleaming Death Machine, Small ceased to exist, so tell me what have you been up to musically for the past couple of decades?

Mike Kenlan: Small officially broke up in early 1996. Silver Gleaming Death Machine had come out in the fall of 95, and we had an amazing national tour with J Church, and Garden Variety, followed by a great European tour. We were really proud of that record, but it just seemed like a good place to stop. For the next couple of years, I played with a couple of other local bands, off and on, and played on the Ashley Stove record All Summer Long in 2001. I’ve been writing, on and off the whole time, but slow to actually get any of the material recorded. One of these days.

The Ash Gray Proclamation: Pipe seemed to coexist with Small for a time. What do you attribute the bands longevity to?

Mike Kenlan: Small ran from 1991 until 1996. Pipe formed in the Summer of ‘91, and I played in both bands until 1993. Chuck Garrison, who plays in half a million bands, played with Small from 1992 to the end, and Pipe the whole time. Clif Mann took my place, and played with Pipe until 1997 or 1998, when I rejoined the band. Pipe broke up in 1999, and got back together in 2009, and we’ve been active ever since. We actually have a new record coming out, sometime later this year. As for longevity, I think it boils down to just having fun with it. We still draw good crowds, and they enjoy themselves, so why not keep doing it ? It really is a hell of a lot of fun to play this stuff, and I think the crowd picks up on that energy, and throws it back at us.

The Ash Gray Proclamation: Can you tell me a little bit about the forthcoming Pipe release?

Mike Kenlan: The Pipe album, it’s called Ball Don’t Lie We just finished getting it mastered, and we’re still trying to figure out who’s putting it out. It’s been many years since we’ve released anything, and in that time, the music world changed. We started the recording process in early 2014 at our friend Alex Maiolo‘s Seriously Adequate Studio, in Carrboro, NC, and then added some tracks and mixed with Nick Petersen at Track and Field
Recording, in Durham NC last year. We hope to have it out by the fall, but who knows. I suspect that we will do some limited touring to support the record. Probably some long weekend trips, up and down the east coast for starters.

The Ash Gray Proclamation: O.K. I’m chomping at the bit to really dig in to the history of Small 23. Can you provide a little insight of how the band came together, Eric Bachmann‘s early involvement, and your recollections of the bands early recording sessions?

Mike Kenlan: Small grew out of another band, called Cupcake U.K. that formed in 1990. We were essentially the same lineup as the early version of Small, but with a frontman/singer, Kelley Cox. Eric and I felt that the band, and the singer were headed in different musical directions, so we reformed as a four piece, with Matt Walter on bass, and Darren Hall on drums, joining Eric (Bachmann)and myself. Neither Eric or I had much singing experience, so we weren’t sure if it would fly. I think we recorded some fairly rough demos with Caleb Southern, before recording the first single at Duck Kee Studios in Raleigh in 1991. That first single was originally supposed to be Empty Room on one side, and a beautiful song of Eric’s called She. Both tracks were too long to fit on a 45, so we went with Nasty Little Chick, Makes Me High, and Somebody Owes Me Money instead. After the single, we changed drummers, and picked up Chuck, who was playing in Pipe.

Soon after that, Eric came in with a batch of great songs, and we went back to Duck Kee, and recorded the Cakes EP during the summer of 1992. What I remember most from that session, is that we recorded the music first, but neither Eric nor I had much down, as far as lyrics, so we took turns scribbling down words, while the other was doing vocal takes, and most are the lyrics are somewhat nonsensical.Eric left to concentrate on Archers Of Loaf, full time in November of 1992, and Dave Hollinghurst joined in January of 1993.

The Ash Gray Proclamation: How did the signing to Alias some about?

Mike Kenlan: Sometime in early 1993, they approached both us and the Archers. Neither band had much experience with the business side of things, and they seemed like nice folks, so we went for it. I remember talking to Eric about it, and we were pretty clueless, but it felt like if both bands signed, it would somehow be better than if just one of us did. It seems like, as soon as we signed, all of a sudden, all these other labels called us, and made us question our decision.

The Ash Gray Proclamation: To me all three full lengths have held up really well and I still find myself returning to those records frequently.Is there a release that stands above the others for you when look back or revisit those recordings?

Mike Kenlan: I’m my own worst critic, so when I hear that old stuff, I’m always thinking of things I should have done differently, or changed. Caleb Southern, who recorded us and the Archers, was always after me to clean up my guitar sound, and I wish I had listened to him. Every few years, I’ll pull out one of the old records and listen, just to see how it holds up to memory. Each of the records has high and low points for me, but I think True Zero Hook, and Silver Gleaming Death Machine are my favorites. I wish we would have gone in a different direction, production-wise on Chin Music, it sounds tinny and boxy to my ears. I have a soft spot for the Cakes EP too, especially Eric’s songs.

The Ash Gray Proclamation: What was the catalyst the led to the end of Small 23?

Mike Kenlan: The simple answer is burnout. We were three records into a five record contract with folks who were well intentioned, but not really the most savvy in terms of marketing. Our last couple of tours, we were playing to better and better crowds, and frustrated by the lack of support we were seeing. The musical landscape was changing too, as it does. When we started, there was a thriving indie scene, but by 1996 everything was getting more corporate, and the musical world was awash in Alanis Morrisette and The Spin Doctors, and we had no intentions of trying to sound like that, to woo those kind of fans. We had an offer to go out as an opening act for one of those hot, major label bands, which probably would have been a smart move, career-wise, but we didn’t do it, because it felt like selling out. I guess we showed them.

The Ash Gray Proclamation: In the summer of 1994 Small 23 played a day long show on Cape Cod with Blonde Redhead, The Dambuilders, Small Factory and many others. That remains one of my top Live music experiences to this day. What do you remember from that show?

Mike Kenlan: Yes, The Beachcomber in Wellfleet! I remember that show really well, we were really humbled to be included on such an incredible bill. The fans in MA were always so great to us, seemingly anywhere we went, but that was a really memorable night. The crowd was really intense, and all the bands I saw fed off of that energy. I seem to recall a late night bonfire on the beach, that turned into an all nighter, that forced us to cancel our drive home the next day, so we could take a recovery day. 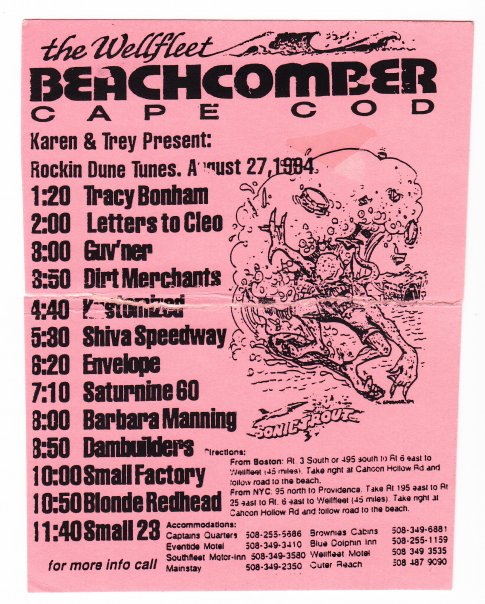 The Ash Gray Proclamation: How much has the Chapel Hill scene changed since it was occupied by bands like Small, Polvo, and Archers? Is there anyone we should be checking out?

Mike Kenlan: I should probably point out that the Chapel Hill scene included a lot of bands from Durham, Raleigh, Greensboro, etc. and each town or city has its own vibe. We also have three major universities, each with really strong college radio stations, that help support the music scene immensely. The scene has definitely evolved and grown, and remains really strong. The Archers, Polvo, Superchunk, etc. all got national attention, but there were dozens more, lesser known bands that really made it a scene. Bicycle Face, Capsize 7, Zen Frisbee, and a bunch more, were equally loved by the locals. Southern Culture on the Skids, and LUD have been putting out great music, continuously since the early 90’s. There was a time where you could go out and hear really amazing local bands five or six nights a week. Since 1990 or so, there have been like two generations of young, up and coming musicians that kept the scene alive, and added their mark to it. Sorry About Dresden, Milemarker, and Jett Rink to name a few. Today, we have bands that are made of of kids of some of the older scene, as well as a bunch of us from back then, who are still making interesting music.Some of my current local faves are Spider Bags, No One Mind, Natural Causes, and Cosmic Punk. We’re really fortunate here, to have a culture which supports original music, and good number of venues for folks to play.