Over the past year or so, I’ve been hearing rumblings of anonymous new hardcore act in the city known as DONE. The band has very little presence on-line and their bandcamp page doesn’t contain any music, but that’s all about change when the band releases their debut full length, Aged & Untreated next month. The band has issued the following statement to provide a hint or two: “It started off with J. writing riffs and programming drums until he got together with D. They then began to start the project writing songs remotely and matching up recordings during quarantine. Things began to open up so they got together a few times and immediately knew this was to be a full band. They teamed up with old friends  B. & L. and recording immediately began. The full length was recorded through early 2021-2022 in our practice space. Having cut their teeth in more bands than you can shake a stick at, Done are both a reaction and a provocation to the ebb and flow of heavy music in Boston. They are equal parts His Hero is Gone and Boston hardcore with a spritz of 2nd wave black metal. On paper you’ll go Oh I know exactly what this sounds like, yet it feels fresh, like a recently opened cut. Crafted and performed with a ferocity that only age and dismay can produce. They are unfortunately still here, and angry about it.”

It’s a thrill to be premiering the sub two minute pummeling and enthralling advance track, The Wall In Every Door from DONE ahead of their debut release and that’s not all, on Saturday September 10th Tor Johnson Records and The Ash Gray Proclamation will present DONE’s tape release show at O’Brien’s along with Sexless Marriage, Deprogrammer Cult, and Glue Horse. Tickets & Info

It was in the spring of 2014 when I had the good fortune of being introduced to Providence’s Twin Foxes through the bands 3-song demo release, but that’s all it took, really. The 3 tracks on that EP were played relentlessly and for good reason. Twin Foxes were able to give nods to seminal 90’s guitar bands like Built To Spill, Jawbreaker, and with the pop sensibilities of Superdrag, all while  managing to deliver something wholly original, beyond those heavy weight influences.  Over the next few years Providence’s self-described heavy indie rock outfit delivered a couple of notable releases 2015’s self-titled EP and last year’s split with fellow Providence noise rock concern , Darklands. Both those EP’s found the band pushing their sound into more dynamic directions while fronter, Jared Mann delivered impressive songwriting rife with wit, introspection and alluring melodies.

Today marks the release of Twin Foxes debut full length LP, Sleeping On The Attic Floor which finds the band displaying an even heavier dose of fuzz, shoegaze, and 90’s guitar crunch than it’s predecessors, paired with the bands strongest song cycle to date. Back in December we had the chance to speak with Jared Mann in an AGP interview and gain some insight on the concept of the new material.

“It’s probably the heaviest thing we’ve done music and lyric wise. I took on some themes of self-discovery, mental illness, and family history in my own life and I believe used the record as a stepping stone to grow as a person. Music’s super therapeutic for me, and spilling my guts this time around just felt right.”

On the album’s opener, Mountain Twin Foxes kicks things off with a slow building track brimming with chiming guitar and complex rhythms before giving way to exhilarating squalls of feedback. On Drownd, the new sets sure fire hit, (if there was any justice or a radio station worth a damn these days) the band delivers a raucous post-punk anthem compete with a catchy as hell chorus before transitioning into a slowcore dirge. The song is reminiscent of Modest Mouse’s, The Stars Are Projectors, but here Twin Foxes put their own stamp on things with vibrant melodies and pristine instrumentation. Throughout this 10 song LP, Twin Foxes manage to surpass expectations set by their early output and intoxicating Live shows by unveiling a thoroughly engaging and expertly written and produced LP. Speaking of which, the new album was tracked and produced by Mann, an audio engineer by trade at his home studio, Distorted Forest and mastered at Machines With Magnets in Pawtucket, making SOTF a true product of the vibrant Providence scene.

Over the past couple of months I have spent a considerable amount of time listening to these songs and as much as I was smitten early on these tracks seem to reveal their subtle charms and considerable hooks during each revisitation. One of the characteristics that I have found in some of my favorite records is those albums that you can put on and find a new favorite track each and every time, Sleeping On The Attic Floor is that type of album. For instance, last month while driving down an desolate highway between Omaha and Lincoln, NE trying to follow GPS directions when seemingly out of nowhere this album’s title track came blaring out of my rental car speakers to bowl me over. The track succinctly encompasses everything that drew me to this band in the first place, angular guitar lines, intricate rhythms, and gigantic pop hooks. With Sleeping On The Attic Floor, Twin Foxes have issued an exceptional record filled with intelligent song craft buoyed upon a  sea of distortion and an LP that begs to be played repeatedly.

Sleeping On The Attic Floor get its official release today via the fine folks at R.I.’s Tor Johnson Records and Boston based Midnight Werewolf Records. Twin Foxes will be out on the road to celebrate the album release with upcoming shows in Western, MA, New Hampshire, Worcester, and Cambridge. Check the bands tour page for details. 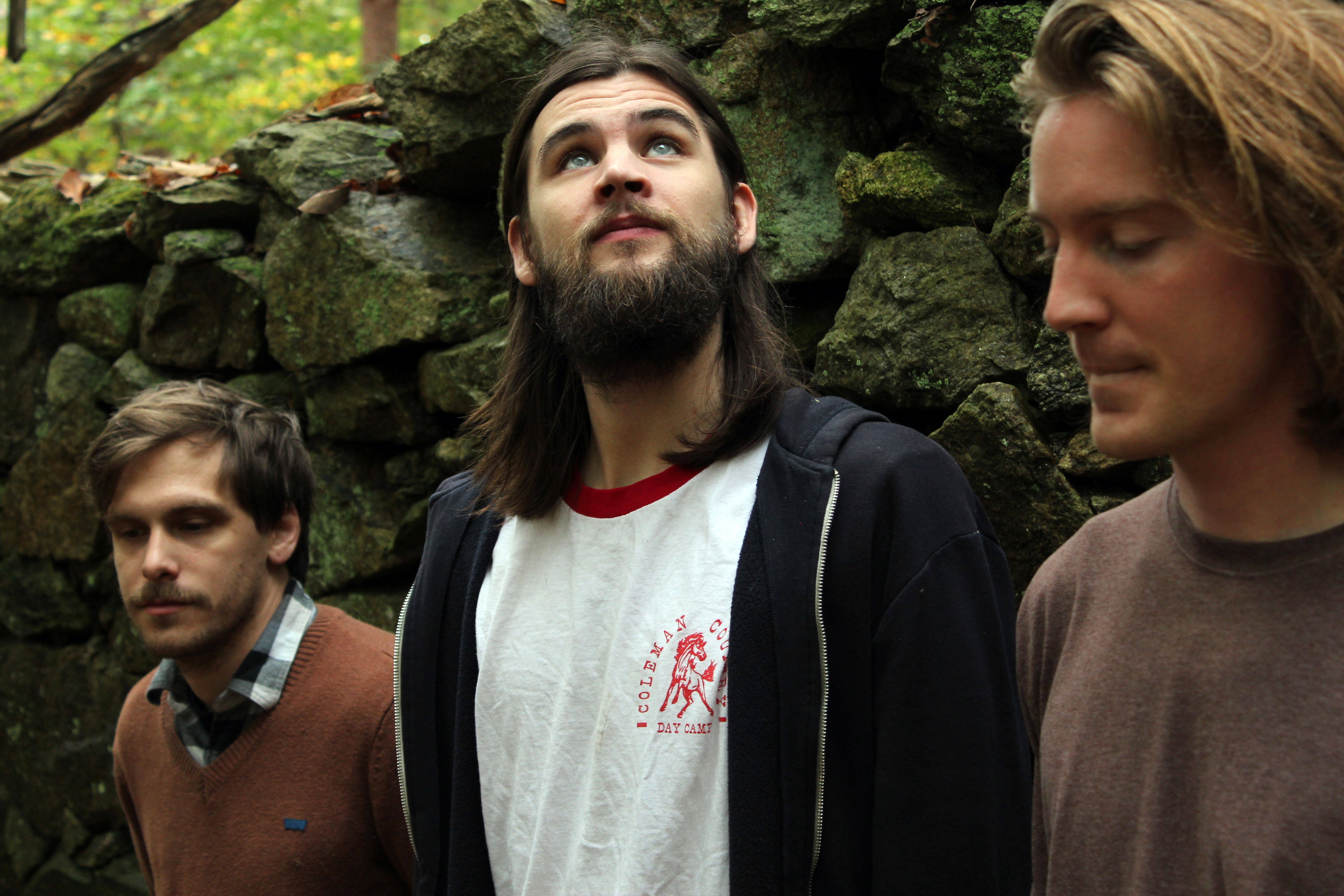 I first discovered Providence’s Twin Foxes in 2014 when I happened upon their their 3 song demo. I was immediately taken by the trio’s penchant for earnest lyricism, gigantic pop hooks, and their noise rock prowess. Since then the band has continued to impress with a self titled EP in 2015 and this years excellent split with Darklands . On February 9th Twin Foxes will issue their debut full length, Sleeping On The Attic Floor and tonight the band will play Noise For Toys |PVD. Earlier this week I caught up with Twin Foxes’ fronter Jared Mann to talk about the new album, the Providence scene, and his lack of a bad Christmas sweater.

The Ash Gray Proclamation: What can you tell us about the forthcoming LP?

Jared Mann: The new record is called Sleeping on the Attic Floor. It’s our first LP, but it’s probably the heaviest thing we’ve done music and lyric wise. I took on some themes of self-discovery, mental illness, and family history in my own life and I believe used the record as a stepping stone to grow as a person. Music’s super therapeutic for me, and spilling my guts this time around just felt right. The production aspect was something I had dreamt up a while ago. I can get pretty particular about that stuff, and since I’m an audio engineer for my job, I just took upon myself to engineer and produce it at my studio, Distorted Forest. We mixed and mastered at Machines with Magnets.

The Ash Gray Proclamation: What are the release plans for Sleeping On The Attic Floor?

Jared Mann: The record will be coming out on Midnight Werewolf Records out of Boston and Tor Johnson Records out of Providence on 2/9/17. Both labels have been super supportive of the record, and it just feels right doing it with them. They work super hard and are involved in the whole process. As true diy-ers we definitely connect at that level.

The Ash Gray Proclamation: How do you feel Twin Foxes have evolved since you began?

Jared Mann: Well I think when we originally started, I was kinda burnt out on music. I had done it for years, and this was just a way to play punk music again and have fun. But it kinda made me fall in love with it all over again. I think the other guys feel the same way too. A musical relationship grew from playing with each other, and I think something bigger blossomed. Now with this record coming out, I’m pretty confident in saying it’s the best thing I’ve done creatively so far.

The Ash Gray Proclamation: What can you tell us about the current landscape of the Providence scene?

Jared Mann: Providence has a great scene. It’s small but a lot of these people have been doing it for a long time. Whether you play in the same genre or not, I think people are generally stoked if you’re doing something creative. There’s a lot of great bands, venues, and people that ensure shows and spaces keep happening. We recently lost a few venues, which has been a bummer, but I know something good will come from it. It always does.

The AGP: Any favorite Providence acts we should be checking out?

The AGP: As we prepare for the inaugural Noise For Toys – Toys For Toys benefit tonight I’m compelled to ask, what’s the best Christmas gift you’ve ever received ?

Jared: Funny enough I grew up not celebrating Christmas haha! So I’m probably not the guy to ask, but I’ve gotten into it later in life. It’s mainly my close friends that exchange stuff, and those gifts are all pretty great. I never got any bad Christmas sweaters or anything, but I’d probably even like those too.

The AGP: Other than a new album what can we expect from Twin Foxes in 2018?

Jared: Well we’re going on tour in February for some dates with the band, then I’m doing a run of solo shows in March. I have the next record demoed out too, so I figure we’ll start production on that soon as well.